“As We Are Now” series

From my early childhood, I remember numerous family visits to cemeteries. It wasn’t that we were abnormally morbid, or a large family with many relatives who had already “passed on.” In fact, we didn’t know any of the people whose markers we examined. My family was just doing something that’s not uncommon in New England: checking out old gravestones. Since my father had been a history major in college and his parents lived in New England, it seemed natural that we should find ourselves exploring old cemeteries, looking for memorable epitaphs and designs.

Along with the consideration of aesthetics, cemetery folk art offers us windows into the lives and cultures of other people from other times. In summing up individual lives, cemetery art tells us something about what people of a certain time and place collectively valued and how they defined their lives.

Around 1980 I discovered that some modern cemeteries featured something of a revival in cemetery folk art. Since about the start of the Industrial Revolution, gravestones mostly offered the basic facts: name, date of birth and date of death. But in the 1970s gravestones and their surroundings began to feature folk art that told us something more about the person or persons they marked. This included images of worldly possessions or pastimes, representations of work occupations or spiritual beliefs, and notes either from or to the deceased.

I took a lot of photographs exploring this subject in the early 80s, but then dropped the project as my attentions focused on other aspects of my life. In the fall of 2008, equipped with a new digital camera and visiting my sister in Texas, we explored some local cemeteries and found that modern cemetery folk art has flourished. I have been photographing it ever since.

In addition, I’m creating a photographic record of what this folk art looks like while it’s new and fresh. Just as most old cemetery art we find today has weathered and faded to near illegibility, modern cemetery art will eventually suffer a similar fate. Depending on the materials and technology involved, that process can happen fairly quickly. 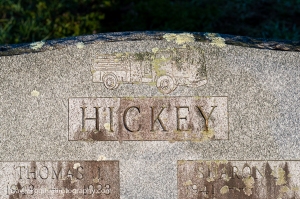 The title of this project – “As We Are Now” – derives from part of a popular epitaph on old gravestones:  “Stranger pause, as you pass by. As you are now so once was I. As I am now so you must be. Prepare for death and follow me.”

My approach of photographing these gravestones in color on sunny days was inspired by a more recent observation of modern life, taken from the Beatles:  “Penny Lane is in my ears and in my eyes, there beneath the blue suburban skies.”

Postscript (5/31/2010): CNN has an item on their website titled “What headstones say about the living.” It’s interesting, though almost all the examples they present are of older gravestones.

As I continued work on this project in 2018, I found myself often drawn to hand-made markers and decorations.

I continued to work on this project in 2017; this is a collection of some of my favorite images from the year.

I continued to work on this project in 2016; this is a collection of some of my favorite images from the year, taken in New York State and Texas.

I took a lot of pictures in 2015 for this series. Here are some of my favorites.

I've continued work on the "As We Are Now" project in 2014; this is a collection of some of my favorites. They were taken in upstate New York and Texas.

I took a lot of pictures in 2011 for this series. In keeping with my tradition of selecting the “best of” for each year, here are some of my favorites.

This is a selection of some of the earlier digital images from this series.

I took many photographs for this project in 2012; you can find 3 sets of them on the As We Are Now series page. This is a collection of some of my favorites from the year. They were taken in upstate New York and Texas.

As We Are Now

The "As We Are Now" series is a study of contemporary American cemetery folk art. This is a selection of some of my favorite photos from the series.

In 2013 I continued exploring the subject of modern cemetery folk art from a somewhat broader (and hopefully deeper) perspective. I’ve increased my attention on artifacts of human emotion - which could span an emotional range from personal messages to loved ones to a coffee cup bearing some unknown significance.

In addition to my November visit to Texas, I've continued work on the "As We Are Now" series closer to home in upstate New York. Given the time of year, the weather and fall foliage often became an ingredient in this collection of images.

These photos are part of the As We Are Now series, taken when I visited Texas in early November, 2012. I found the late fall sunlight perfect for this project.

Photos for the "As We Are Now" series taken during the summer of 2012. Compared to my earlier work on this series, I've become more interested in cemetery folk art in general - not just the monuments themselves.

Images for the "As We Are Now" series that I took while visiting Texas in November, 2011.

Sunny weather with blue skies has been very hard to come by this year. However, we finally had a few nice days and I was able to take some more photos for this series. Here are some of my favorites.

Photos for this series that I took during the earlier part of a very rainy 2011.

One Response to “As We Are Now”