Last week I had the chance to meet some of the residents of Albany Rural Cemetery. No, I wasn’t at a seance or anything else paranormal. I was instead taking a tour of a part of the cemetery during which cast members at various grave markers told us about their lives and how they wound up where they are. The event was put on by The Historical Society of the Town of Colonie. It was a fascinating experience that offered a tangible dimension that would have been missing from a simple tour with a dry presentation about who was buried where.

I’d brought my infrared camera with the idea of taking pictures of some of the markers. But I wound up creating infrared images of the presenters in their period costumes. I really like the effect – everything seems more ethereal and timeless. You’ll find them below, along with the brief bios provided to us by the Historical Society. In the end I gained a greater appreciation of how much history is rooted in the Capital Region – especially in Albany Rural Cemetery.

(Per the ARC website: “Among the many historic people interred in ARC are: the 21st President of the United States, Chester A. Arthur; 34 members of Congress; eight presidential Cabinet members; five New York State governors; and 55 mayors of the City of Albany since it founding.” There are also over 1,000 Civil War soldiers buried there, including a handful of confederate soldiers.)

Charles Fort: author of several books on unexplained phenomena; beings on Mars controlling events on earth; a sinister civilization extant at the South Pole. Fort said he didn’t believe anything he had ever written. Portrayed by Ed Bablin.

Joseph K. Emmet: comedic stage actor, best known for his depiction of a character in the play “Our Cousin German.” Emmet Street in North Albany is named for him. The original Wolfert’s Roost was built by “Fritz” Emmet. Portrayed by Sean Owens.

Fredrick Cleveland: founder of the Cleveland Baking Powder Company. Cleveland lost two young children with fever, which was later found to be from contaminated water in the home well. His mansion on Van Rensselaer Blvd. was called “Greyledge.” Portrayed by Brian Dollard.

Daniel Manning and his second wife

Daniel Manning: businessman, journalist, and politician. Became editor and owner of Albany Argus. Most notable for having served as the 37th United States Secretary of the Treasury under President Grover Cleveland. Manning Boulevard is named in his honor. Portrayed by Peter Crouse.

Louis Menand: born in France, came to America and became an authority on horticulture and botanical subjects. Established his business north of Albany near Albany Rural Cemetery. The Village of Menands is named for Louis Menand. Portrayed by Eric Washburn.

Brig. Gen. Adolph Von Steinwehr: born in Germany, his father was a major in the ducal service, grandfather was Lt. Gen. in Prussian Army. Educated at a military academy in Germany, he became a brigadier general in the Army of the Potomac during the Civil War. Steinwehr Avenue in Gettysburg is named for him. Portrayed by Robert Mulligan.

Capt. John Cooke: born in England, emigrated to America. Joined local militia company. Fought in Mexican War and Civil War, where he was wounded in action at Port Hudson, LA. Was a messenger at State Attorney General’s office until his death in 1875. Portrayed by Will Trevor.

Mary McPherson: born in Scotland in 1804, moved to Albany in 1819. Had a bronze statue atop a rose-coloered Scottish granite of famed Scottish poet Robert Burns erected in Washington Park at her bequest. Sculptor was Albany native Charles Calverly. Portrayed by Diane Doring. 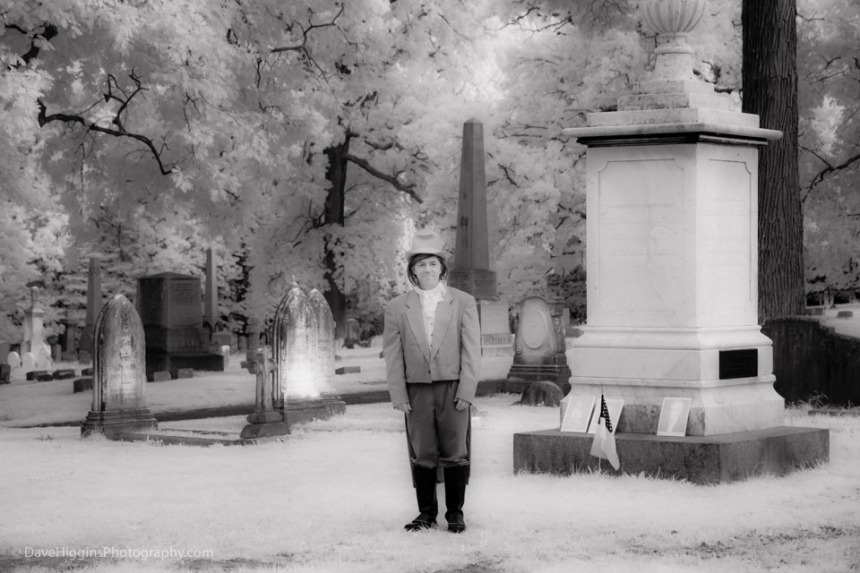 For more stories about Albany Rural Cemetery residents, visit my page Visits With The Dead.

All photographs are © Dave Higgins and “Dave Higgins Photography,” 2018; all rights reserved.